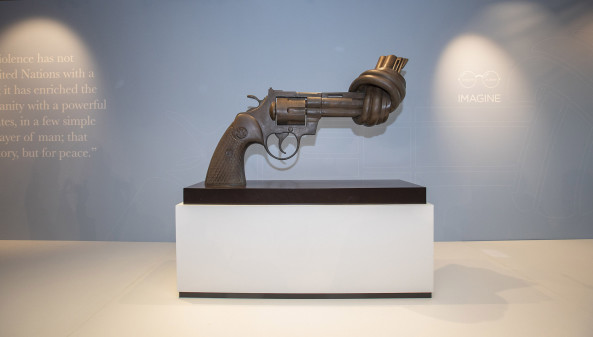 The bronze sculpture has been gifted to Belfast by the Olsson Family from Sweden and was accepted on behalf of the City by Lord Mayor John Finucane with presence of NVPF Co-Founder Jan Hellman at a ceremony held at Girdwood in North Belfast.

The City of Belfast has been warmly welcomed into an illustrious group of locations around the world that have embraced The Knotted Gun sculpture and its supporting organisation, the Non-Violence Project Foundation (NVPF).
Belfast will join a number of international cities including New York, Tokyo, Stockholm, Cape Town and Berlin that host a permanent sculpture of The Knotted Gun – an international symbol of peace, created by the Swedish artist Carl Fredrik Reuterswärd for his friend John Lennon after he was shot and killed outside his home in New York on December 8th, 1980.
The bronze sculpture has been gifted to Belfast and its citizens by the Olsson Family from Sweden and was accepted on behalf of the City by Lord Mayor John Finucane at an unveiling ceremony held Friday (September 13th) at Girdwood Community Hub in North Belfast, where it will be on permanent display.
As owners of Europe’s largest ferry company Stena Line, which operates 7 ships and 3 routes to Britain from Belfast Harbour, the Olsson family has a long-standing relationship with Belfast and is committed to supporting lasting peace in Northern Ireland.
Presently there are over 30 locations around the world hosting one of the most recognisable symbols of peace which is supported internationally by a number of world-famous Global Non-Violence Ambassadors including Yoko Ono, Ringo Starr, Lionel Messi and many others. 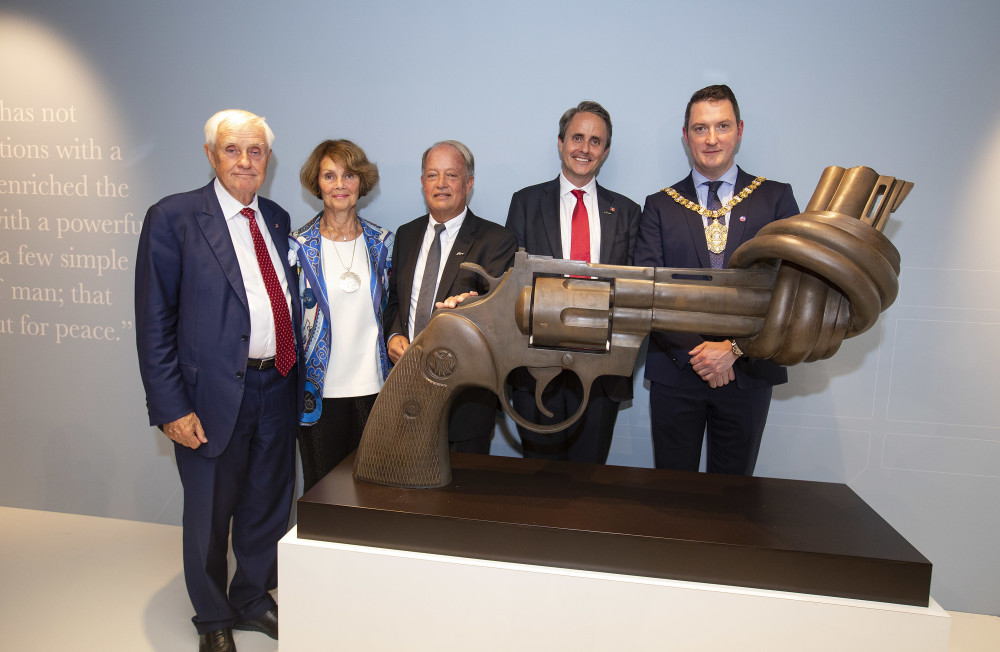 Stena Line owner Dan Sten Olsson commented: “Northern Ireland is a very important region to Stena Line and we have a long history and relationship with the community here, which has helped us create one of the Company’s largest freight and passenger travel hubs.
“Since we moved our ferry services to Belfast in 1995, I personally and our company have established a bond with the City of Belfast and its people. Having business interests around the world, I can say that Belfast is a good place to do business and hopefully we can leave a positive and lasting legacy – and not only on the commercial front.
“We’re investing in new ships, and continually supporting tourism and trading here BUT we’re also committed to being a good corporate citizen, so we’re very happy and proud today to donate this iconic peace sculpture, which was originally founded in Sweden, as a gift to Belfast and its citizens.”
Mr Olsson added: “We are fully aware that there is more to a City than its economic prosperity. The unveiling of The Knotted Gun sculpture will also herald the start of a process of greater engagement for Belfast with the Non-Violence Project Foundation (NVPF), and perhaps there are examples and inspirations from around the world that we can harness here today to hopefully play a small part in this continuing journey for Belfast and Northern Ireland.”
Belfast’s Lord Mayor John Finucane said: “The Knotted Gun is a world-renowned symbol of peace and non-violence and I’m delighted that Belfast will be joining a very vibrant and engaged family of cities around the globe in hosting this iconic sculpture. The siting of the sculpture is also hugely significant as Girdwood Community Hub has been developed as a shared space as part of our city’s ongoing journey on the path of peace and reconciliation.”
“On behalf of the city of Belfast and all its citizens, I would like to sincerely thank Mr Olsson and his family for making this enormously generous and inspiring donation. It’s an honour to accept it and I trust its presence here will be an inspiration for generations to come.”
Jan Hellman, Chairman and Co-founder of the Non-Violence Project Foundation (NVPF), added: “To be here in Belfast and be a part of the unveiling of the world’s strongest peace symbol, the Knotted Gun, is an important step for the Non-Violence Project Foundation. The symbol is a universal message of peace and non-violence, it speaks louder than words, crossing all cultures, religions and ages and it is an honour to welcome Belfast as an official ‘City for Peace’. Also, a warm thank you to Stena Line, a perfect and very serious partner in our quest to stem violence around the world.”
WATCH THE MOVIE: NON-VIOLENCE PROJECT X CITY OF BELFAST 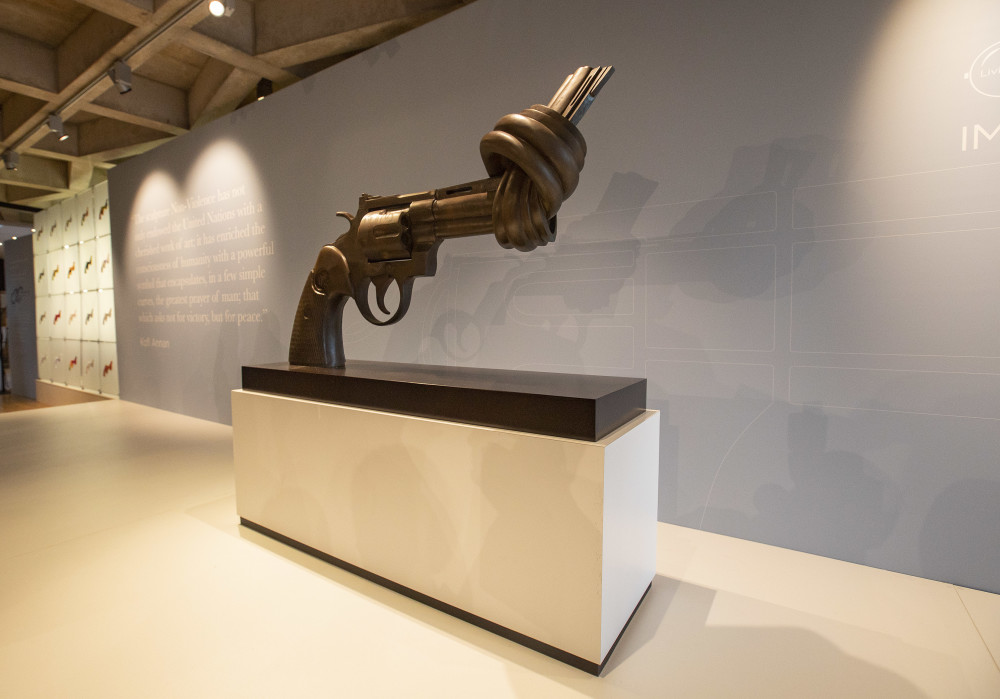 About the Non-Violence Project Foundation (NVPF): NVPF is a non-profit organisation whose mission is to INSPIRE, MOTIVATE & ENGAGE young people on how to solve conflicts peacefully. It holds violence prevention and non-violence education programs for schools and sports clubs around the world. NVPF, was registered in 1993 in Geneva, Switzerland and has currently offices in 11 countries around the world. Its logo is the iconic Knotted Gun sculpture named Non-Violence. NVPF has educated eight million students, teachers, and sports coaches with programs covering three main subjects: conflict management, self-esteem building, and non-violence. www.nonviolence.com
About Stena Line: Stena Line is one of Europe's leading ferry companies with 37 vessels and 20 routes in Northern Europe. Stena Line is an important part of the European logistics network and develops new intermodal freight solutions by combining transport by rail, road and sea. Stena Line also plays an important role for tourism in Europe with its extensive passenger operations. The company is family-owned, was founded in 1962 and is headquartered in Gothenburg. Stena Line is part of the Stena AB Group, which has about 16 000 employees and an annual turnover of around 36,5 billion SEK. For more information please visit www.stenaline.com
About Belfast City Council: Belfast City Council is the local authority with responsibility for part of the city of Belfast, the capital and largest city of Northern Ireland. The Council serves an estimated population of 333,871 (2011) the largest of any district council in Northern Ireland, while also being the fourth smallest by area. Belfast City Council is the primary council of the Belfast Metropolitan Area, a grouping of six district councils with commuter towns and overspill from Belfast, containing a total population of 579,276. The current Lord Mayor is John Finucane of Sinn Féin. Councillor Finucane was first elected to council in the local elections held on 2 May 2019.
Partager cet article sur :